Too much or just right? Cozy T-Shirt for lounging.

This is the second installment of t-shirt makeovers, and we're still dealing with the blue and black skiing tee.

Somewhere along the way I ended up with the bottom half of a gray shirt in my fabric stash. No seams...just a gray, jersey, tube. So with the top and strips of the black shirt from yesterday, and this (unaccounted for) bottom of a gray one, what else but to put them together?

1.) Before I attach top and bottom... the gray piece was a little too big around so I took that in. I added some elastic to the top edge, sewing down the middle and then on either side of the first line for a faux shirred band.

I hemmed the bottom edge (since this is jersey material the end won't ravel, but I opted for the hem giving it a more finished look. You may or may not want to skip this step).

2.) Sew the top and bottom pieces together, 3.) Modify the neckline. For a simple fix, I cut the shoulder seams an inch or two; folded the neck inwards; and stitched down.

4.) Making more ruffles. I took the pieces leftover from yesterday (and a few I got from the excess gray material), and sewed two gathering stitches down the middle.

5.) I decided to make flowers with the gray pieces. To do that, I simply pulled one gathering thread tighter than the other and wound the fabric into a rose shape. Stitch together at the bottom.

6.) Arrange the flowers and ruffles, and stitch down.

It's so cozy and I like how the gray breaks up the black! What do you think...Too much ruffles or just right? 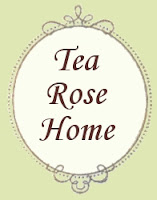